‘Addiction Mess’ Is Their Family’s Message to Others 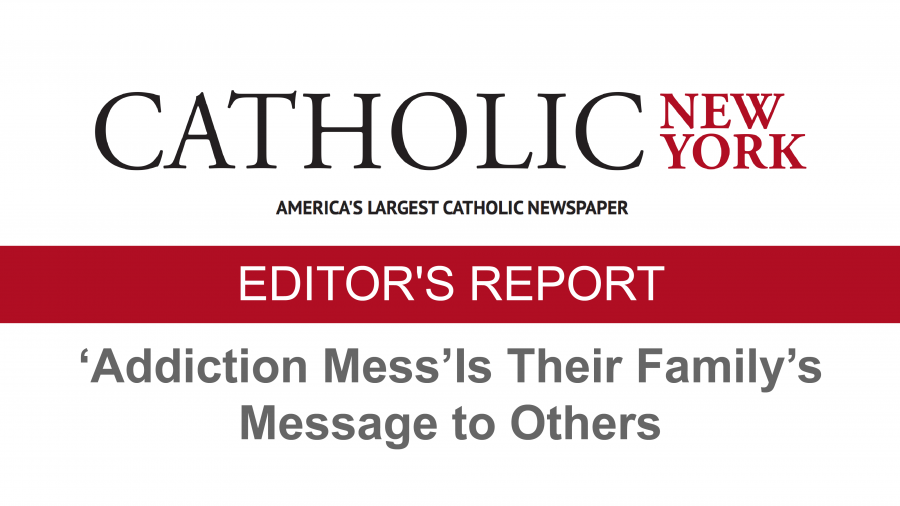 Like many of you, I set aside a book or two to take on vacation. In Cape Cod last week, I read one that brought me so much satisfaction and joy that I wanted to share it with you.

The author, or rather one of the co-authors, is a woman I have gotten to know a bit in my work at Catholic New York. Her name is Nancy McCann Vericker. I actually know Nancy’s husband, Joe Vericker, a little better. He’s a professional photographer whose work has occasionally been featured on these pages, including his assignment as the archdiocese’s official photographer during the 2015 visit of Pope Francis to New York.

The book’s title is “Unchained.” Ms. McCann Vericker wrote it along with her son JP. The whole Vericker family, Nancy and Joe and their four children, including JP and his three sisters all find their way into its pages. But it isn’t a heartwarming tale, as much as it is one of hardship and heartache brought about JP’s addiction to drugs and alcohol when he was in his late teens.

The subtitle is “Our Family’s Addiction Mess Is Our Message.” Mother and son don’t pull any punches as they share their story exploring the near misses, false starts and profound disappointments along the way.

Earlier in her life, Nancy worked as a reporter for Gannett newspapers. The lessons she learned came back to her. Her writing is both gripping and gritty. Take, for instance, this passage about the isolation that an addiction crisis can inspire. “No one comes to your door with a casserole dish or bouquet the day after the police arrive at your home. Very few people call to see how your family is holding up while your son or daughter is in medical detox,” she wrote.

She then adds another hard truth. “During the years I felt so cut off, it was mainly because my own shame and fear built a wall between me and others,” Nancy wrote. “There were many good people who tried to reach out. But there also were times I had to guard myself and my family against judgment.”

JP’s battle with addiction was more than his family could handle. The scenes of his struggles played out a decade ago. They negatively affected every aspect of his life, as his desire for drugs took precedence over everything else.

So it was important that they found professionals they could count on when JP’s problems became overwhelming. One such person was Paul, who ran a halfway house in Florida where JP ultimately lived for a time. When Nancy and Joe went down to check out the place, it was not exactly love at first sight, either with the house or with Paul, who was more than a little rough around the edges. They found common ground only when Nancy told Paul that she was then 18 years sober. “It’s what I want for my son,” she said.

“God put him in our path,” Nancy told me. “His unflinching commitment to give away his gift of recovery to us taught me so much. He taught JP the ropes.”

“And he taught me what I had to do in that chapter of my life to best love my son.”

The Verickers are writing a happy ending to their story. Not only is JP living a sober life, he is co-founder of a substance abuse treatment program in Massachusetts.

Nancy is a woman of faith who serves as a spiritual director and is a lifelong member of Immaculate Heart of Mary parish in Scarsdale, where she is a youth minister. “Unchained,” which was released by Clear Faith Publishing, is a story of real faith and love in the midst of struggle. You will love Nancy’s “Secret Belief,” which I am not going to spoil for you.

“We just want to help families get the help they need,” Nancy said.

Buy Unchained: Our Family's Addiction Mess Is Our Message