A Father’s Day Deal – Hope on the Horizon 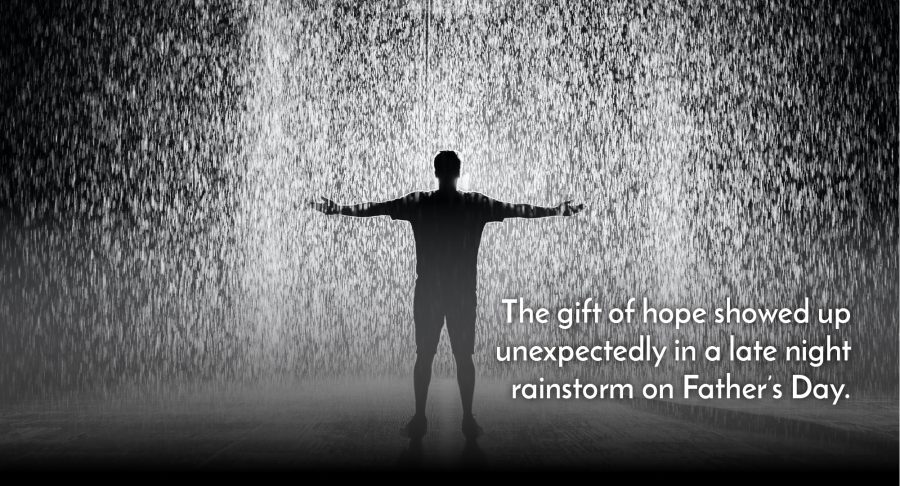 Father’s Day can be an excruciating 24 hours for families struggling with the systems illness of addiction.

There are so many perfect Hallmark card expectations of how family relationships are supposed to be.

Before our son, JP, began his life of recovery, Father’s Day was very difficult for every member of our family.

But the gift of hope showed up unexpectedly in a late night rainstorm on Father’s Day. JP and I wrote about that turning point in A Father’s Day Deal in our book, Unchained: Our Family’s Addiction Mess Is Our Message.

I was waiting for God to answer some prayers.

Father’s Day was a few days after I got home from the hospital. The girls and I gave Joe presents and cards, and we all had breakfast and dinner together.

After dinner, a powerful thunderstorm blew in. It was almost 10 p.m. when we heard a knock at the front door. There in the glass window standing soaking wet was JP.

I knew, just as sure as I knew my own name, that his arrival was the answer to prayer.

He said he wanted to talk to us. He didn’t want to come in the house. He asked us to join him outside on the stone porch in the front of the house.

It was very dark out, and the rain was coming down in sheets. The three of us sat together on white wicker chairs sheltered by the big porch roof held up by 100- year- old fieldstone walls and columns as thunder crashed overhead. Somehow it felt safe for all of us.

Even in the darkness, I could see JP was thin and broken.

…I remember the feelings I had right before going to detox again. I had come to the realization that my life was falling apart.

I had not taken drugs or alcohol for a couple of days, so a window into the pain, anguish, and heartache I was running from started to open. Without substances in my body, the reality of everything that had taken place started to set in. I had raw emotions. My nerves felt like I was having teeth drilled without novocaine.

…The general state that I was in was broken. It was like the foundation of a house that had been demolished. Little remained of who I had once been years before.

I was empty and drained. I had (once) been sober for a period of time, and although I really didn’t do shit to stay sober, there was a part of me (then) that was alive. I wanted to get in touch with that part of me again.

I wound up making a deal with my parents and going to detox.

It was very late, and Joe and I needed to move quickly. We called the treatment center, arranged for a bed in the detox, worked out the finances, and booked a flight for the next morning.

Like an O. Henry story, Father’s Day ended with an unexpected twist: our son showing up at the door with some willingness. Joe responded to his son’s request for help with unconditional love – the essence of Father’s Day, really, a tremendous gift.

As I lay in bed in the dark with the storm outside and my husband and all four of my children safely inside, I felt a lot of gratitude – another unexpected gift – for answered prayer.

Have you found unexpected gifts in the midst of your family’s struggle with addiction?

Please share here. We can all be inspired by our collective experience, strength and hope.

For information and guidance for help and resources for you or your loved one please email: info@nancyvericker.com
Nancy is co-author of Unchained: Our Family’s Addiction Mess Is Our Message.

Get Your Copy Of Unchained

Buy From Clear Faith Publishing
Available on Amazon.com
Previous PostEncouragement- An Antidote to Fear
Next PostAngels With Skin On – Help Is Available