A New Year’s Resolution: Remember Who You Are 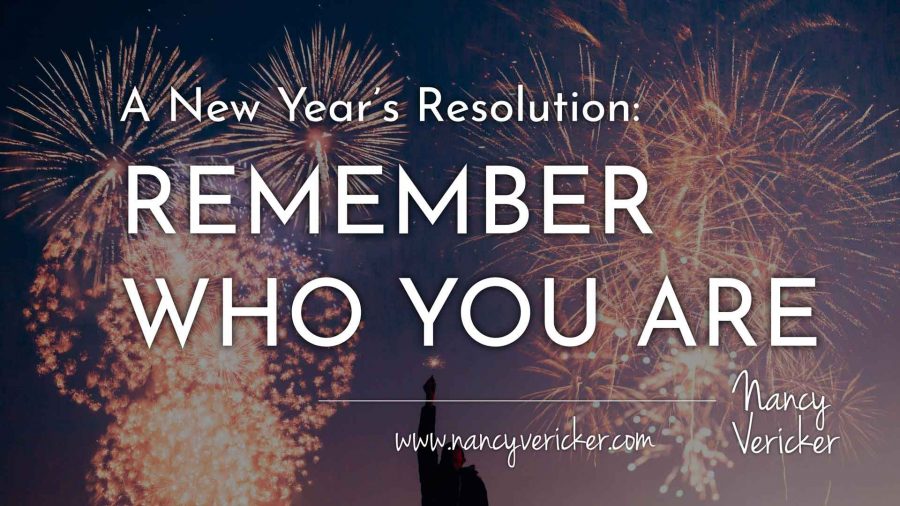 Excerpted from Unchained: Our Family’s Addiction Mess Is Our Message

On New Year’s Day I ran into Evelyn, my first newspaper editor, at an event. She was bureau chief in an office that had a fraternity house vibe. Evelyn and the guys had coined a nickname for me: Nanny McCanny. I wanted to put on a happy face for Evelyn, but she is not someone you can fool. Instead I told her my son was a homeless addict. Evelyn did not address JP’s situation. She simply said, “Nanny, remember who you are. Remember who you are.”

Remember who you are.

Her words cut through the failure and self-loathing I was wrapped in.

Remember who you are.

I thanked her. It was sound advice I needed to hear from a good friend on the first day of a New Year.

JP resurfaced that afternoon and—no surprises here—he found a halfway house to take him. He called us on the phone as we were driving to Manhattan with our daughters. He gave us the name and phone of the manager of the halfway house, who said they would do a great job supervising our son’s sobriety and would we send a check for $800 to cover the cost of processing his application?

We strongly felt this halfway house and JP’s promises were not truthful. But we agreed to fund it in the hopes he would make good on his word to stay clean. We knew from Paul that all halfway houses were not created equal. In fact, some are what I call puppy mills—places that house kids still using so they can collect the weekly rent for a bed. Our sense was this place was a puppy mill.

Right after we got off the phone with JP, we called Paul and asked him about the place. Paul bluntly described it as a dump run by dishonest people.

“But that’s ok,” he said, matter of factly. “He’s not going to last long there. He will wind up using and being thrown out, and that will help him reach his bottom. It’s a terrible place.”

If I could rewind the tape, it would have been wiser to insist JP find a “Paul-approved” place to live or sleep on the beach with other homeless people. It would have shortened the dangling by a noose we were all doing by going along with a sham.

I reached out to my parents and told them I was sober. I asked them to help me get into another halfway house, and they agreed. I actually had been sober for a few days and remember thinking: I have to stop this negative cycle.

A few days later, a guy offered me drugs. It didn’t take much convincing and off again I went. My usage reignited like a keg filled with gunpowder. I almost instantaneously surpassed where I had left off and the amount I was using.

This is the unfortunate reality of drug addiction. When addicts stop using for a day, a month, or a year, the disease still remains exactly where it was since the last time. Shortly after they relapse and re-ingest whatever substances, they are right back to where they left off.

I continued to use at this halfway house for the remainder of my time there.

The story of the Prodigal Son in the Gospel of Luke began to take on a deeper meaning for me. Church can be such a cleaned-up experience. I love the language of this parable; it is not cleaned up at all. The younger son had been living a low-life existence. He was a heartless, selfish young man who demanded his share of his father’s inheritance before his father even died. A fellow of this caliber probably isn’t occupying a church pew on Sunday.

This more than two-thousand-year-old story offers a model for how families can recover. The father completely cut his son loose when he demanded his share of the family inheritance. The father did so without anger or recrimination. He left the burden of the son’s decision
fully on his son.

The son left for a “distant country, and there squandered his wealth in wild living.” Now the father was a man of some means with a lot of options. He could have sent a family emissary to track down his lost boy. He could have gone in person to try to persuade his wayward adult child of the error of his ways. He could have gone rogue and sent a goon squad to knock some sense into the son.

But the father did none of these things—he waited.

How did he do that? How did he hold off from worrying, seeking, enabling, hunting, or railing against his son?

Those are all things I did.

But based on Luke’s spare prose, the father had a far different and far more effective strategy. This strategy can be seen when the broken son finally journeyed home.

“But while he was still a long way off, his father saw him and was filled with compassion for him; he ran to his son, threw his arms around him and kissed him” (Lk 15:20).

Now Luke gives us no clue as to what went on with the father interiorly. Maybe he was pissed off at his son; maybe he did worry; maybe he wracked his brains over how things could have gone differently.

But ultimately, the father’s waiting stance bore fruit and his heart was fully ready to receive his son in God’s time. The father waited and prayed when there was not a shred of evidence the son would ever return. And I believe those fatherly prayers helped the wayward son realize eating pig slop was not a good life strategy. That image of the waiting father was a source of encouragement for me as I waited for JP’s homecoming. I just wished I could have waited with as much grace as I envision that father had.

Safe to say, my husband, Joe, has a lot more of the father’s character and temperament in him than I do. I admire Joe deeply. My husband’s ability to distance himself from JP’s choices and to accept with some degree of peace events that were unfolding—even if it wasn’t what he ever wanted for his son—proved a much better way of managing the whole thing than my pretty much chronically frantic stance.

Who knows? Maybe there was a Mother of the Prodigal Son home wringing her hands in a state of high anxiety about her son’s situation. Maybe that’s why the father went alone to the vantage point to look for his lost son—because the Mother of the Prodigal Son was just pretty damn crazed by the whole thing and difficult to live with. Maybe she spent a lot of her time complaining about the whole situation to the older brother. (Maybe that’s one of the reasons why the older brother had such resentment about his younger brother.)

And what did the Mother of the Prodigal Son do to keep it together while her younger son unraveled, and her husband waited?

Do you remember who you are in the midst of a family addition crisis?

Who helps you remember that you are strong for this challenge?

What New Year’s Resolutions have you made for 2021?

Please share here. We can all be inspired by our collective experience, strength and hope.

Get Your Copy Of Unchained